Lahore Fort (Punjabi and Urdu: شاہی قلعہ‎:  ‘Shahi Qila’, or “Royal Fort”) was originally designed to protect the Northern-Western entrance to the walled, old city of Lahore in Pakistan. It is a citadel in the city of Lahore, Punjab, Pakistan. Lahore is a historical city filled with landmarks. People can also say that Lahore carries a lot of figments from the past. Lahore has been the cultural and social hub for the subcontinent for century’s Enumerable emperor’s set foot in this city and constructed a number of grandiloquent structures that still carry the weight of history. Lahore fort is one of the pillars of this rich legacy of this city.

The fortress is located at the northern end of walled city Lahore and spreads over an area greater than 20 hectares. It contains 21 notable monuments, some of which date to the era of Emperor Akbar. The Lahore Fort is notable for having been almost entirely rebuilt in the 17th century when the Mughal Empire was at the height of its splendor and opulence.

Though the site of the Lahore Fort has been inhabited for millennia, the first record of a fortified structure at the site was in regard to an 11th-century mud-brick fort. The foundations of the modern Lahore Fort date to 1566 during the reign of Emperor Akbar, who bestowed the fort with a syncretic architectural style that featured both Islamic and Hindu motifs. Additions from the Shah Jahan period are characterized by luxurious marble with inlaid Persian floral designs, while the fort’s grand and iconic Alamgiri Gate was constructed by the last of the great Mughal Emperors, Aurangzeb, and faces the renowned Badshahi Mosque.

Spanning over 20 hectares, Lahore Fort is a magnificent treasury of 21 notable monuments dated back to Mughal Emperor Akbar. Mughal rulers had built the whole structure in 17th during the boom of Mughal’s glory and opulence. After the fall of the Mughal Empire, Lahore Fort was used as the residence of Emperor Ranjit Singh, founder of the Sikh Empire. The fort then passed to British colonialists after they annexed Punjab following their victory over the Sikhs at the Battle of Gujrat in February 1849. In 1981, the fort was listed in the UNESCO World Heritage Sites and received a generous donation for preservation and conservation. 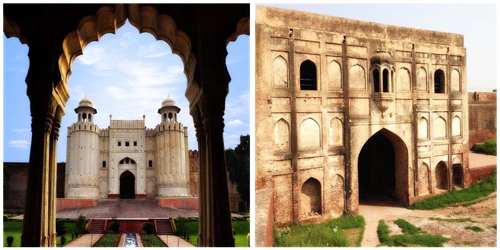 The fort is located in the northern part of Lahore’s old walled city. The fort’s Alamgiri gate is part of an ensemble of buildings, which along with the Badshahi Mosque, Roshnai Gate, and Samadhi of Ranjit Singh, form a quadrangle around the Hazuri Bagh. The Minar-e-Pakistan and Iqbal Park are adjacent to the northern boundary of the fort.

Lahore Fort has two main gates for entrance 1st is Akbari Gate and the other is Alamgiri Gate. The Fort has many gardens inside, rendering serene and tranquil ambiance while strolling around. The history of the sumptuous legacy is explicitly mentioned on the different boards erected near the Akbari gate. In various eras of Mughal’s dynasty, notable structures were built in Lahore Fort along with lush gardens. The facades include Daulat Khana-e-Khas-o-Am, Jharoka-e-Darshan, Akbari Gate, Maktab Khana, Kala Burj, Lal Burj, Mosque Maryam Zamani Begum, Diwani-e-Aam, Shah Burj, Sheesh Mahal, Naulakha Pavillion, white Moti Masjid, Alamgiri Gate, and Three-doored Pavillion.

Built, damaged, demolished, rebuilt, and restored several times before being given its current form by Emperor Akbar in 1566 (when he made Lahore his capital), the Lahore Fort is the star attraction of the Old City. The fort was modified by Jehangir in 1618 and later damaged by the Sikhs and the British, although it has now been partially restored. Within it is a succession of stately palaces, halls, and gardens built by Mughal emperors Akbar, Jehangir, Shah Jahan, and Aurangzeb, comparable to and contemporary with the other great Mughal forts at Delhi and Agra in India. It’s believed that the site conceals some of Lahore’s most ancient remains.

The fort has an appealing ‘abandoned’ atmosphere (unless it’s packed with visitors) and although it’s not as elaborate as most of India’s premier forts, it’s still a fabulous place to simply wander around.

The wall of the fort is quite wide and thick. It was made to withstand the attack from any intruder that may have the intention to capture the fort. Inside the fort are buildings that housed the Kings of that era. Beautiful gardens also adorn the ambiance of the fort. These were the parks where Kings used to stroll. One can get an idea of the luxurious life the kings used to spend by viewing these marvelous structures. 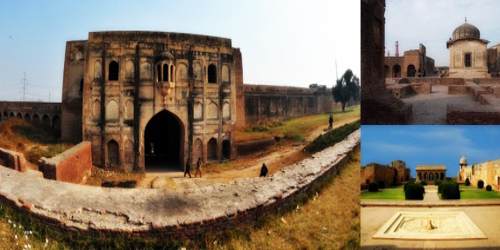 The temperature at Lahore fort is very hot in summers, so bring visitors water with them and keep a headscarf wrapped at all times. It is better to hire a guide that can show visitors all the important places in the correct sequence and tell interesting trivia related to the sites inside the fort. Must see places are:

In 1980, the Government of Pakistan nominated the fort for inclusion in UNESCO World Heritage Site based on the criteria i, ii, and iii together with the Shalimar. In the fifth meeting session held in Sydney in October 1981, the World Heritage Site committee added both the monuments to the list. In 2000, it was listed in the UNESCO Heritage Sites and received a generous donation for preservation and conservation. Conservation works at the Picture Wall began in 2015 by the Aga Khan Trust for Culture and Walled City of Lahore Authority. Documentation of the wall using a 3D scanner was completed in July 2016, after which conservation work would start.

The whole fort is divided into two sections, the first administrative section, connected with entrance, and includes gardens of Diwan-e-khas but the second section is dedicated to royal residence and approachable from the elephant gate. Sheesh, Mahal, and small gardens are also included in this section. The exterior walls of the 2nd section are furnished with blue Persian Kashi tiles, Mosaic art, and calligraphy. The huge Picture Wall has been taken as the triumph of Lahore Fort and exquisitely decorated with the vibrant pattern of glazed tiles, faience mosaics, and fresco. Stretching to the northern and western walls of the city, the embellish wall is approximately 1450 feet long and contains 116 panels that interpret multiple subjects like elephant fights, angels, and polo games.

In short, Lahore Fort is the majestic spectacle of Lahore that depicts the glorious history and culture of Lahore’s Walled City and requires an extensive amount of time and endurance to explore and appreciate.