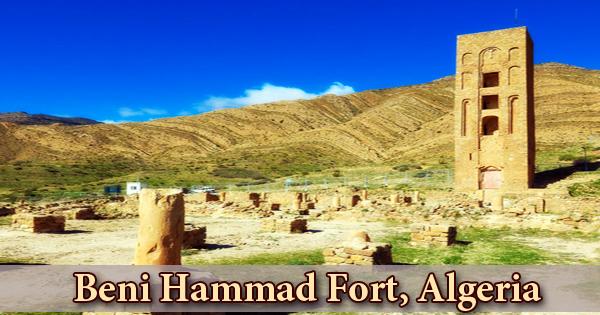 Beni Hammad Fort, also known as Beni Hammad’s Al Qal’a (Arabic: قلعة بني حماد‎), is an imperial Islamic city, now ruined, founded in central Algeria during the eleventh century CE (fourth century AH). It served as the first capital of the Hammadid dynasty in the 11th century. It is northeast of M’Sila, at an elevation of 1,418 meters (4,652 ft), in the Hodna Mountains and receives ample water from the surrounding mountains. It is one of the Islamic civilization’s most interesting and most correctly dated monumental complexes. Near the town of Maadid (aka Maadhid), about 225 kilometers (140 mi) southeast of Algiers, in the Maghreb, is the Beni Hammad Fort. After their freedom from the Zirids and the Fatimids of Tunisia, the seat of the Hammadids was founded by the founder of the Hammadid dynasty, Hammad bin Buluggin I (reg. 1015-1028 CE / AH 406-419), starting in 1007 CE (AH 397).

The settlement developed rapidly into a flourishing metropolis and cultural center from the base of the original qalat, or fortress. In its fortified settlement in the Maadid mountains, Qalat Beni Hammad attracted commercial caravans, scientists, musicians, theologians, politicians, and poets. It was the first capital of the Emirs of Hammad and had great splendor. In 1980, it was inscribed as a World Heritage Site by UNESCO, and described as “an authentic picture of a fortified Muslim city”. Within 7 km of partly dismantled defensive walls, the Qal’a contains a significant number of monumental ruins, including the Great Mosque and its minaret, and a number of palaces. The mosque is the largest after that of Mansourah and its minaret is the oldest in Algeria after that of Sidi Boumerouane, with its prayer hall containing 13 ships out of 8 bays. The Qal’a Ruins bear witness to the great sophistication of North Africa’s Hammad civilization, original architecture, and palatial culture. 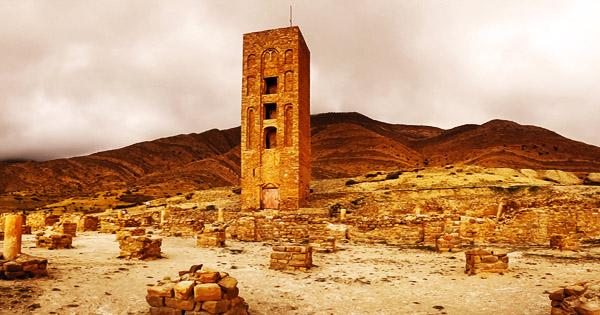 The primary source summary of the resident city of al-Bakri (1014-1094 CE / AH 404-487) and the historical account of Ibn Khaldun (1332-1406 CE / AH 732-808) testify to the military power of the city as well as its economic and intellectual capital. At the end of the eleventh century, just before the Hilalian incursions precipitated the collapse of the town, the town reached the height of its regional importance during the rule of the later Hammadids. Numerous terracotta, gems, coins and ceramics that attest to the high degree of civilization under the Hammadid dynasty have been brought to light by excavations. Several decorative fountains using the lion as a symbol are also among the discovered artifacts. Three independent residences divided by gardens and pavilions form the ruins of the emir’s palace, known as Dal al-Bahr.

Established as a military fortress in 1007, it was raised to the status of a metropolis. It has inspired the development of Arab architecture, including the Maghreb, Andalusia, and Sicily, as well as other civilizing influences. The key artifacts that attest to the richness and influence of this Hammadid culture are the archaeological and monumental vestiges of the Qal’a of Beni Hammad, including the Great Mosque and its minaret, as well as a number of palaces. The palace of Dar al-Bahr was named for its rectangular pool measuring 67 by 47 meters (220 by 154 ft). To launch a ship, a ramp at one end of the pool was used. In the accounts of contemporary tourists, references to nautical displays in this pool appear.

In central northern Algeria, approximately 110 kilometers south of the Mediterranean coast and 190 kilometers southeast of Algiers, Qalat Beni Hammad is situated. The site is adjacent to Sidi Mohammed el Fadhel’s small village, but the nearest town is M’sila, the modern provincial capital, 26 kilometers southwest of the complex, or 70 kilometers by road. The gardens stretched east-to-west through the city beyond the walls of the palace complex and to a depth of nearly 100 meters (330 ft). Archeologists have not visited the gardens yet, but ornamental fountains have been found.

The city became the capital of the Berber Hammadids, and in 1017 it was under siege by the Zirids. It was abandoned in 1090 under the threat of Banu Hilal and partially destroyed in 1152 by the Almohads. The qalat is located near the peak of Takarbust on the Hodna plateau, the summit of which was enclosed by a large ring of fortifications that established the boundaries of the walled city. The average height of the enclosed city is 990 meters above sea level, while, at its highest point, the Takarbust peak rises to 1418 meters above sea level.

At the time of the inscription, the remains of the 7 km of defensive walls and all the monumental remains found therein were the characteristics that characterize the land. The State Party intends to recommend a revision of the property boundaries and to set up a buffer zone to preserve the exceptional atmosphere of the site. The property’s integrity is guaranteed, but the remains are subject to natural deterioration and weathering. The town is defensively placed to allow a clear view of the plain of Hodna 400 meters below and to the south, while the settlement is bordered by mountain slopes to the north, east, and west. The UNESCO-recognized imperial complex occupies approximately 150 hectares.

Many of the smaller and more modest structures have been lost because of a lack of maintenance or inhabitation in the centuries since the foundation of the city, however, there is evidence of some large buildings. Near its longitudinal core, the mosque is situated in the south of the walled city. The mosque is very large, with a rectangular plan measuring east-to-west 56 meters wide and north-to-south 64 meters long. The longitudinal axis of the mosque aligns with the meridian between the north and the south. At the center of the north wall, a minaret is located, while public entrances open into the mosque courtyard on the east and west walls.

Another architecturally important building inside Qalat Beni Hammad is the Qasr al Manar, also known as the “Castle of the Beacon Light”. Qasr al Manar is a large defensive structure at the edge of a cliff overlooking the Hodna plateau to the south, a fortified projection of the eastern wall of the city. The stone masonry structure is approximately cubic in size, measuring 30 meters wide from east to west and 32 meters long from north to south. The fort also includes a wide reception room at its upper level with a domed ceiling, which opens onto a rooftop terrace. Though primarily a military structure, during times of peace, the Qasr al Manar was built to accommodate imperial diplomatic functions.

Scattered fragments of the eleventh-century building and its decorations have survived elsewhere in the complex. Carved marble water channels, parts of frescoes within the palaces, ceramic pottery, marble sculptures, crystal and glassware are among the artworks. Carved stone friezes, carved stone and plaster muqarnas, and multicolored tiles made using multiple artisanal techniques are architectural remnants. In the modern period, the site was identified by the French historian Méquesse in 1886. In 1908 CE, under the supervision of the French archaeologist de Beylié, modern excavations of the site were first carried out. Later excavations were undertaken by Lucien Golvin between 1951 and 1952 CE, and after 1964 CE under Bourouiba. The 150-hectare Qalat Beni Hammad site was named in 1980 as a UNESCO World Heritage Centre.