A Dyson sphere is a theoretical mega-engineering project that encircles a star with platforms orbiting in tight formation. It is a hypothetical megastructure that completely encompasses a star and captures a large percentage of its power output. It is the ultimate solution for living space and energy production, providing its creators ample surface area for habitation and the ability to capture every bit of solar radiation emanating from their central star.

According to British-American theoretical physicist Freeman Dyson, who first speculated about these putative structures in 1960, an intelligent alien species might consider the undertaking after settling on some moons and planets in their local stellar neighborhood. The concept is a thought experiment that attempts to explain how a spacefaring civilization would meet its energy requirements once those requirements exceed what can be generated from the home planet’s resources alone. As their population increased, these extraterrestrials would start to consume ever-greater amounts of energy.

Only a tiny fraction of a star’s energy emissions reach the surface of any orbiting planet. Building structures encircling a star would enable a civilization to harvest far more energy. The first contemporary description of the structure was by Olaf Stapledon in his science fiction novel Star Maker (1937), in which he described “every solar system”, surrounded by a gauze of light traps, which focused on escaping solar energy for intelligent use.” 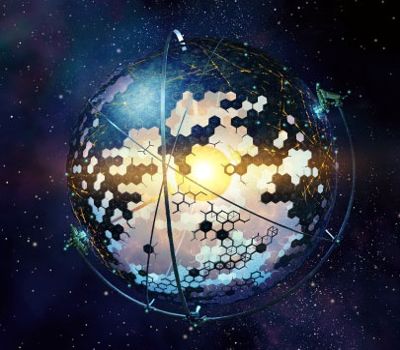 The concept was later popularized by Freeman Dyson in his 1960 paper “Search for Artificial Stellar Sources of Infrared Radiation.” Futurist George Dvorsky has penned an article in which he proposes building a Dyson Sphere around the Sun by basically destroying Mercury and using it for parts.

Dyson proposed that searching for evidence of the existence of such structures might lead to the discovery of advanced civilizations elsewhere in the galaxy. Dyson speculated that such structures would be the logical consequence of the escalating energy needs of a technological civilization and would be a necessity for its long-term survival. In his conjectures, Dyson was not suggesting that all technological societies would enact this outlandish project. He proposed that searching for such structures could lead to the detection of advanced, intelligent extraterrestrial life. Rather, some might have, he reasoned, and therefore, it would be valuable for human astronomers to search for these colossal examples of intelligent minds.

Dyson’s two-page paper in the journal Science was titled Search for Artificial Stellar Sources of Infrared Radiation because he was imagining a solar-system-sized solar power collection system not as a power source for us earthlings, but as a technology that other advanced civilizations in our galaxy would, inevitably, use. Different types of Dyson spheres and their energy-harvesting ability would correspond to levels of technological advancement on the Kardashev scale.