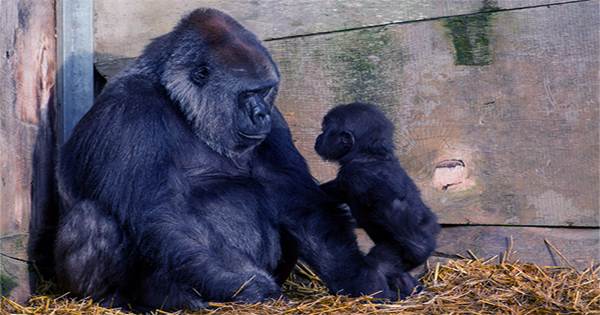 Before Christmas, Bristol Zoo Gardens in England welcomed new members to their gorilla enclosure. In just six months, the newborn’s second lower-western gorilla was born at the zoo.  The still-unnamed newcomer joins baby Hasani, who was named in a public survey in November shortly after her birth. Touni, the mother of the newborn, was born naturally on the morning of December 22 at Gorilla House with Dad, Jock, and the rest of the soldiers nearby.  The guards were delighted to find the baby born by Touni the next morning, whose last child Ayana returned in 2017.

Nigel Simpson, Bristol Zoological Society’s Head of Animal Collections, said in a statement, “Touni is a great mother and she is taking good care of her child.” “All the early symptoms are positive, and the baby seems strong and healthy. Since these early days are important we will keep a close eye on both mother and baby.”

The birth represents an important milestone for the future protection of Western lowland gorillas listed critically endangered by the IUCN Red List. Although populations are found in Cameroon, the Central African Republic, the Democratic Republic of the Congo, and Equatorial Guinea, the largest and most widespread of all gorilla subspecies, their numbers have risen sharply in recent years following the outbreak of the Ebola virus.

Simpson continued, “This is also good news for the Bristol Zoological Society, which manages both the Bristol Zoo Park and the Wild Place project, as we are part of an internationally important breeding and conservation program.” “It’s amazing to see a newborn gorilla, they’re so charismatic and such an iconic species.”

Toni’s Joy Bundle has joined seven more gorillas at the zoo, all of which have been named to a global breeding program by working with other wildlife organizations to maintain genetic diversity among captive animals. The Bristol Zoological Society, which owns the Bristol Zoo, has also become a champion of the species by focusing on several conservation projects around the western lowland gorilla conservation in Monte Allen National Park in Equatorial Guinea.

These wild animals are at risk of falling prey to their meat and pet trade, as babies are often stolen to sell to foreign pet enthusiasts. There are also fears that the outbreak of COVID-19 in these animals could be catastrophic for this wild population.