The Mosque-Madrassa of Sultan Hassan (Arabic: مسجد ومدرسة السلطان حسن‎) is a huge Mamluk period mosque and madrassa situated in Cairo, Egypt, near the Citadel. This building blends power and splendor, grace, and elegance, as well as a number of decorations. The main northern façade, which stretches to around 145 m in length and reaches a height of 38 m, is one of the most prominent features of the house. It was built during the Bahri Mamluk period, commissioned by Sultan An-Nasir Hasan, between 1356 and 1363. For its large scale and revolutionary architectural elements, the mosque was considered remarkable and is still considered one of the most impressive historic monuments in Cairo today.

In a prominent location below the Citadel, towards which the monumental portal is oriented, the free-standing complex, which had a monumental domed mausoleum flanking minarets, only one of which remains, is located. All the duration of the façade is occupied by the muqarnas-hood portal. The façade consists of a series of decorations in stone and marble and ends with a magnificent and elegant cornice at the apex, consisting of nine levels of minute muqarnas that resemble a honeycomb. The tallness of the outside dividers and the plan of the windows give the veneers an emphatically vertical accentuation. At the hour of development, the mosque was viewed as exceptional for its awesome size and creative design segments. 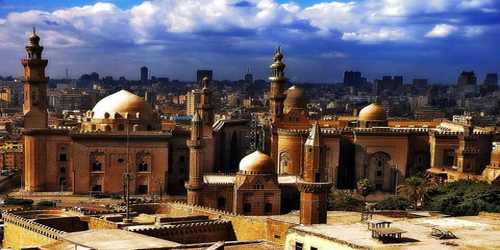 The Mosque-Madrassa Of Sultan Hassan

At the age of 13, in 748 AH/1347 CE, Sultan al-Nasir Hasan (full name: An-Nasir Badr ad-Din Hasan ibn Muhammad ibn Qalawun) ascended the throne. The building of the mosque is considered all the more noteworthy as it coincided with the destruction caused by the Black Plague, which frequently hit Cairo from the mid-14th century onwards. Its construction began in 1356 CE (757 AH) and work proceeded for three years “without even a single day of idleness”. The façade of this mosque includes a towering portal, considered one of Egypt’s most imposing entrances to an Islamic building. The portal is distinguished by an arched ceiling decorated with a superb array of muqarnas tiers, which is a semi-dome. It is also assumed that limestone from the Giza Pyramids was extracted for use in the building of the mosque.

Two minarets, the older being the 81,60 m tall southern minaret, top the building’s eastern façade. In the manner of Mamluk minarets, both minarets consist of a square base followed by two octagonal stories. In the 20th century, the minarets were rebuilt. The madrasas’ four iwan layout occupies the middle of the plan, with a fountain of ablutions in the middle of the courtyard and the four madrasas located in the plan’s corners. In 1659, the northern minaret connected to the tomb fallen. In 1671-1672, the minaret was supplanted with a little one, with a somewhat unique structure, and at the same time, the first wooden arch of the catacomb was supplanted with the current vault, additionally in an alternate shape from the first. 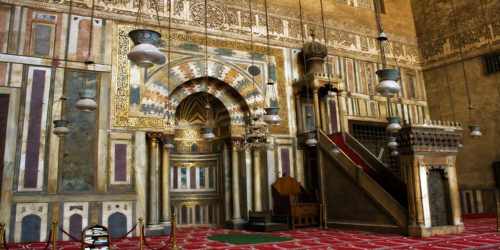 Inside view at the Mosque-Madrassa Of Sultan Hassan

The qibla iwan is considerably larger than the other three, which in size and scale are all monumental. It is geared towards Mecca, which is to the southeast of Cairo, like all the mosques. With a surface area of 7,906 sq m, the floor plan of the building is polygonal; the longest side is 150 m in length, and the shortest is 68 m. The building is built of stone and consists of an open central courtyard in the center of which is a fountain for ablutions. The construction was inspired by the madrasa building phenomenon, where the aim was to teach religion according to the Sunni law schools, delving deeply into the understanding and teaching of Islam.

Moreover, two additional minarets were initially expected to remain over the amazing entrance of the mosque, particularly like in the design of Mongol Ilkhanid and Anatolian Seljuk madrasas and mosques around a similar period, which were in all likelihood a motivation. As opposed to coordinating the understudies’ cells into the focal space, the cells were masterminded along the street facades and their windows contain a necessary aspect of the engineering of the facades. However, one of those minarets toppled and killed about 300 people during construction in 1361, including children in the primary school below. The builders abandoned their work after this, leaving only the two minarets next to the mausoleum we see today. 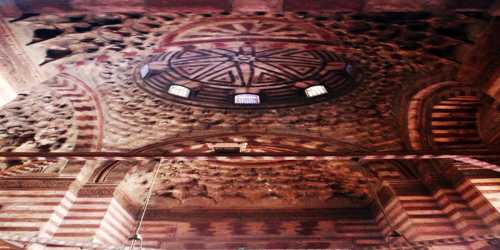 The vestibule chamber, with dome and muqarnas vaulting, as well as ablaq stonework.

When Sultan Hasan died in AH 762 / AD 1361, with the exception of some additional works done by Bashir al-Jamdar, the building was almost complete. These works included the execution of the covering of the marble wall and the marble floors, the dome of the courtyard fountain (completed in AH 766 / AD 1364), and the two wide door leave belonging to the copper doors that can now be found in al-Mu’ayyad Sheikh’s mosque. The original bronze-covered entrance doors were forcefully purchased in the early 15th century by Sultan Mu’ayyad for use in his own mosque at a modest price, and can still be seen there today.

Contrast between Literature and Language