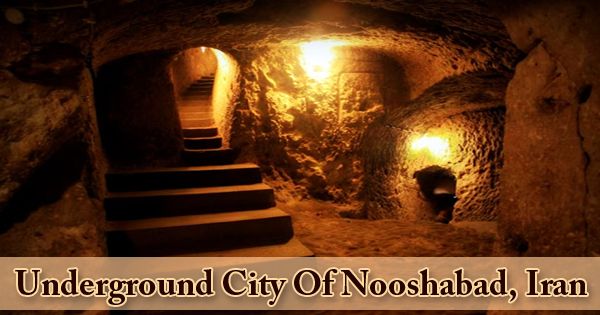 Nushabad (Persian: نوش آباد‎, also Romanized as Nūshābād; also known as Noshābād) is the central district of Aran Va Bidgol which is located about 5 kilometers in the north of Kashan, Isfahan province, Iran. Its population was 10,476 at the 2006 census, including 2,859 households. Nushabad means a city of cold, tasty water. It is well-known for its man-made underground city, called Ouee (or Ouyi), used as a shelter against invasions and attacks by inhabitants. During Sassanid and pre-Islamic times, it was dug up four floors underground 1500 years ago. A prominent piece of ancient architecture is known to be the underground city of Ouyi (Noushabad), situated 5 km north of Kashan, Isfahan province. It experiences harsh weather as Noushabad city is situated in the central desert area of Iran. Noushabad has a very warm temperature during the day and it gets especially cold during the nights.

The people of Nooshabad, who were the capital residence, began digging one of the most amazing underground structures in Iran about 15,000 years ago in the pre-Islamic period, especially during the reign of the Sassanid dynasty. Originally, this remarkable tunnel complex, 8 km north of Kashan, grew around a freshwater spring, credited with providing delicious, crystal-clear water. Due to the fear of enemy invasions, citizens created this secret city. For this town, they used high-intelligence methods so that it was unknown to present Nooshabad residents until 2006, when one of the residences accidentally discovered this place when he tried to dig a well in his house. 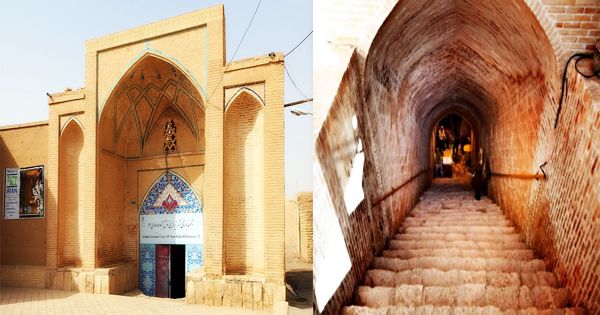 The entrance of the underground city of Nooshabad

Today, only part of the tunnel system is accessible to tourists and these sections are frequently subject to flooding (note the two-color tone of the walls reflecting the level of the flood), but even a simple descent to the first level gives an idea of the difficulty of this ancient project of engineering. The reason this city is called Noushabad (meaning the ‘city of cold tasty water’) is because one of the Sassanian kings who passed through this region stopped here in ancient times to drink water from a well and found this water exceptionally clear and cold. He, therefore, ordered the construction of a city around the well and called it Anoushabad, which eventually became Noushabad.

This labyrinthine area, consisting of three-story tunnels, was composed of chambers, air ducts, staircases, canals, and booby traps. The individual chambers were mixed over the years, and air ducts, water pipes, storage areas, and toilets were all created to create a sustainable underground city that was used during times of war as a shelter. Each family had a sort of room of their own, with a tunnel running down the length of these rooms, similar to the hallway of a hotel. While it is difficult to excavate some large parts of this city because of the infiltration of water and waste into it, overall, three floors of this man-made city were found 4-18 meters away from the surface of the earth. The height of this place was appropriate for an average human height, but in certain areas, in order to pass the vestibules and entrances, they need to bend.

One explanation for the creation of this underground city is thought to be to offer an escape from the region’s elevated daytime temperature. At one-meter intervals, there are remaining 700-year-old fat-burning lamps on walls. On the upper floor and in this way, they also considered several tunnels; the fresh air circulated throughout the area. The main explanation for the carving of the underground city of Noushabad, however, came from the fact that this area was vulnerable in the past, suffering from raids, and that the inhabitants could shelter there during such attacks by creating an underground chain of passages underneath the entire city. They could enter any place in the city via these passages without being seen. 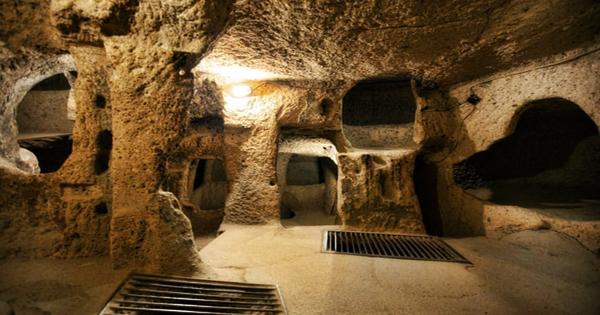 As passageways between floors, vertical tunnels were used and the U-shaped tunnels were used for ventilation. The ventilation system works on the basis of the difference between the internal air pressure and the external air pressure, which allows air to flow into the underground city. To connect houses and social centers, such as the bathhouse and the mosque, as well as the castle located near the underground town, passage tunnels were built. There were many distinct openings to access the underground town. Some of these openings were placed inside people’s houses and others were located in important meeting areas, such as just outside the city, the main fort. Without the need to go outside, people could survive for many days in the underground tunnels.

It is listed on Iran’s National Heritage List; it is the world’s largest underground city with an area of 4 square kilometers, 4 to 18 meters deep. During the Mongol invasion in the 13th century, the tunnels, which were put to good use, served especially well as an emergency shelter since there were many entrances to the underground chambers, some of which appeared inside the houses of the city. In this underground city, there are three levels, planned in a way that moves from down to up to the various levels necessary. To prevent enemies from accessing the upper floors, this made it easier for the citizens sheltering in the underground area.

Some may not even have learned this city’s name since it was not discovered until around 20 years ago (in 2006). It should also be noted that many areas of this vast subterranean city, which are scattered on the ground almost throughout the city, are still being explored and not yet open to tourists.