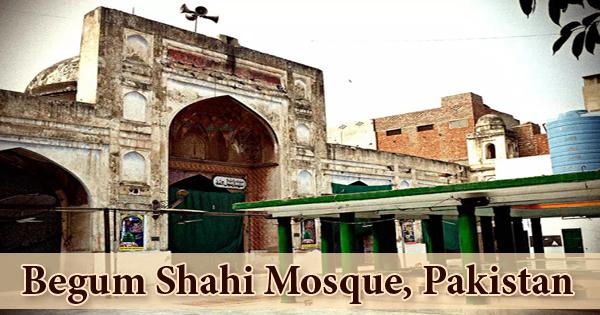 Begum Shahi Mosque (Urdu: بیگم شاہی مسجد‎), officially The Mosque of Mariyam Zamani Begum (Urdu: مریم زمانی بیگم کی مسجد‎), is the Mughal era’s oldest surviving monument and is also regarded as the Mother of all Mosques. Located in the Walled City of Lahore, Punjab, Pakistan, it is an early 17th-century mosque. The title given to Wali Nimat Begum, one of Akbar’s wives, is Maryam Zamani (also spelled Mariam Zamani), who later became the mother of Crown Prince Salim Jahangir. Some historians say that she is the daughter of Amer’s Raja Bharmal, while some claim that she was Akbar’s Portuguese wife. The mosque was built in honor of his mother during the reign of Mughal Emperor Jahangir between 1611 and 1614. It is Lahore’s earliest surviving example of a mosque from the Mughal period, and a few decades later inspired the building of the larger Wazir Khan Mosque. This mosque was converted under Sikh rule in the name of the most celebrated Sikh hero, Bhai Mani Singh ji, as Shaheed Ganj Bhai Mani Singh.

The gate of the Walled City that leads directly to this mosque is the Gate of Masti. The gate, constructed in 1566 by Akbar, was the original main gate of the fort. This gate became known as Masjidi Gate because of the mosque just opposite it (also known as Masti Gate, a corruption of Masjidi). There is no longer a doorway, but a directional sign will take you there on the circular route. Historians claim that after this mosque and as Masjidi Gate, Masti Gate was named; the name was corrupted to Masti Gate as known today over the course of time. 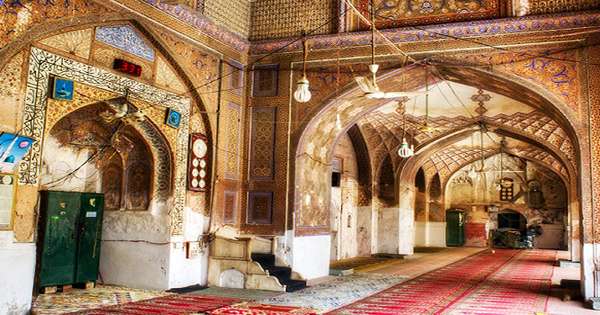 Several shops have entered the mosque, and views of the mosque from the Akbari Gate of Lahore Fort have been obstructed by illegally developed tyre shops. The mosque is located right in front of Lahore Fort’s Akbari Gate. Legend claims that an underground tunnel originally linked the mosque to the fort so that royal women could come to this mosque to give prayers and return unnoticed. The Walled City of Lahore Authority declared in July 2016 that the shops would be closed, and the mosque would be retained and restored as well.

This Mughal mosque in Lahore is the first to have a five-bay facade, according to various architects, which became the key template for many mosques designed on the subcontinent by the Mughals. The mosque was built in honor of his mother, Begum Mariam-uz-Zamani, who was also known as ‘Maharani Jodha Bai,’ during the reign of the Mughal Emperor Jahangir. For representatives attending the Mughal court, the mosque possibly acted as the main mosque.

This mosque, known as Begum Shahi Mosque, is Lahore’s oldest surviving Mughal mosque. It is also named “Lady of the Badshahi Masjid” With brick masonry, the mosque is completed and rendered with plaster. It is a very small structure compared to Wazir Khan and the other mosques of his day. Initially, an area of 135 ft by 127 ft was occupied by the mosque, which has now been reduced due to some commercial and residential areas developed around it; invasions are also a factor. The architectural style is an Afghan and Mughal hybrid. It is the first to show a five-bay front, which later became the standard style of almost all Mughal mosques, experts say. On its north and east sides, it has two entrances. There is a waste tank in the middle of the courtyard. Another attribute of the mosque is that it has twin domes. 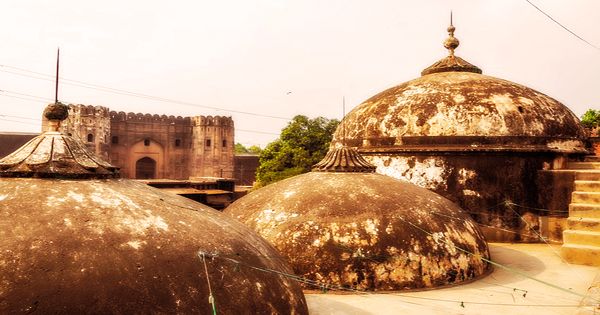 The mosque features a series of low domes

In 1611, work started and lasted until 1614. Some part of the mosque was converted into Shaheed Ganj Bhai Mani Singh, where Maharaja Ranjit Singh temporarily transformed some part of it into a gunpowder factory, for which it was then known as Barudkhana Wali Masjidh (“Gunpowder Mosque”). The mosque was restored to the Lahore Muslims in 1850, who were able to contribute to its reconstruction. The presence of vibrant fresco work inside is characterized by the mosque. The color combination is splendid. These exquisite fresco decorations are replete with the entire interior of the prayer hall, which are unrivaled in Pakistan for their delicacy and lively variety.

A water cistern for ablution is in the center of the mosque’s courtyard, now in a very restored shape and has lost the original look. The courtyard was lined with brick tiles, but new brick has now been fully re-laid. The mosque features the first five-bay prayer room in Lahore, which would later be characteristic of all later Mughal mosques, such as the Wazir Khan Mosque and Badshahi Mosque. The central bay of the mosque is in the Persian Char Taq style and is flanked on either side by a smaller dome. Originally, the mosque had 3 gateways, 2 of which survive.

The chamber of prayer, 130′-6″ long and 34″ wide, is split into five compartments. A medallion with radiating stellate and net forms made in stucco is at the center of the main dome. The tiny space in between is filled with stars in Naskh characters bearing the names of Allah. The designs, including flower pots, cypresses, and palms, are floral and geometrical. A courtyard measuring 128 by 82 feet, which has an ablution pool for Islamic ritual washing, is also in the mosque.

Under Sikh law, this mosque suffered considerable damage. Maharaja Ranjit Singh used it as a gunpowder plant. It came to be known, therefore, as Barud-khana Wali Masjid. During the British time, the mosque was restored to Muslims by Major McGregor, Lahore’s Deputy Commissioner, in 1850. The mosque’s interior features extensive Mughal fresco work, and a few decades later it would be the model for the intricate and extensive frescoes at the Wazir Khan Mosque. Most frescoes are floral in nature and non-Quranic text is used in calligraphy on the walls, and it is the first mosque to feature this tradition in Lahore. 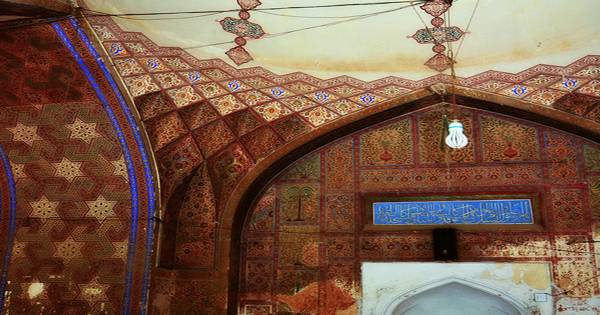 Geometric, floral, and inscriptional stucco ornaments are treated to the central mehrab arch. In other buildings and monuments, such geometrical designs are uncommon and seldom found. Some pieces were flaked away from the fresco and some were painted with whitewash. On the ceilings and elevated walls and corners, the fresco is mostly intact. The mosque contains Quranic and non-Qur’anic inscriptions. An inscription features a Persian inscription over the northern gateway that reads:

God be thanked through whose grace, under the auspices of His Majesty, this building was completed. The founder of the edifice, the place of salvation, is Queen Mariyam Zamani. For the completion of this edifice, which resembles paradise, I was thinking about when at last I found it in the words “What a fine mosque!”

The significance of the mosque also lies in the outstanding paintings known as ‘monnabat kari’ that are an example of artistic work. It is characterized as the art of decorating the surface of objects painted or made of ivory, wood and brass with twisted wire laid side by side with small equilateral triangles that result in a geometric pattern. The mosque is no longer a tourist attraction anymore; it was surrounded by invasions from all sides, a rim market on one side and a Moti Bazar shoe market on the other. There were also several houses constructed nearby. This region that was once invaded was part of the mosque and the circular garden.

Views of the mosque have been obstructed by illegally constructed shops that have surrounded the mosque. The mosque has been ravaged by invasions, a lack of maintenance, and pollution. On its walls, cracks of tears formed and the artwork faded with the passing of time. From the rooftop of Akbari Gate of Lahore Fort, the domes of the mosque can be seen, except that it is not much visible unless visitors/tourists walk into the markets crossing the alloy rims and shoes.